Pleased to be interviewed for this piece on ABC. 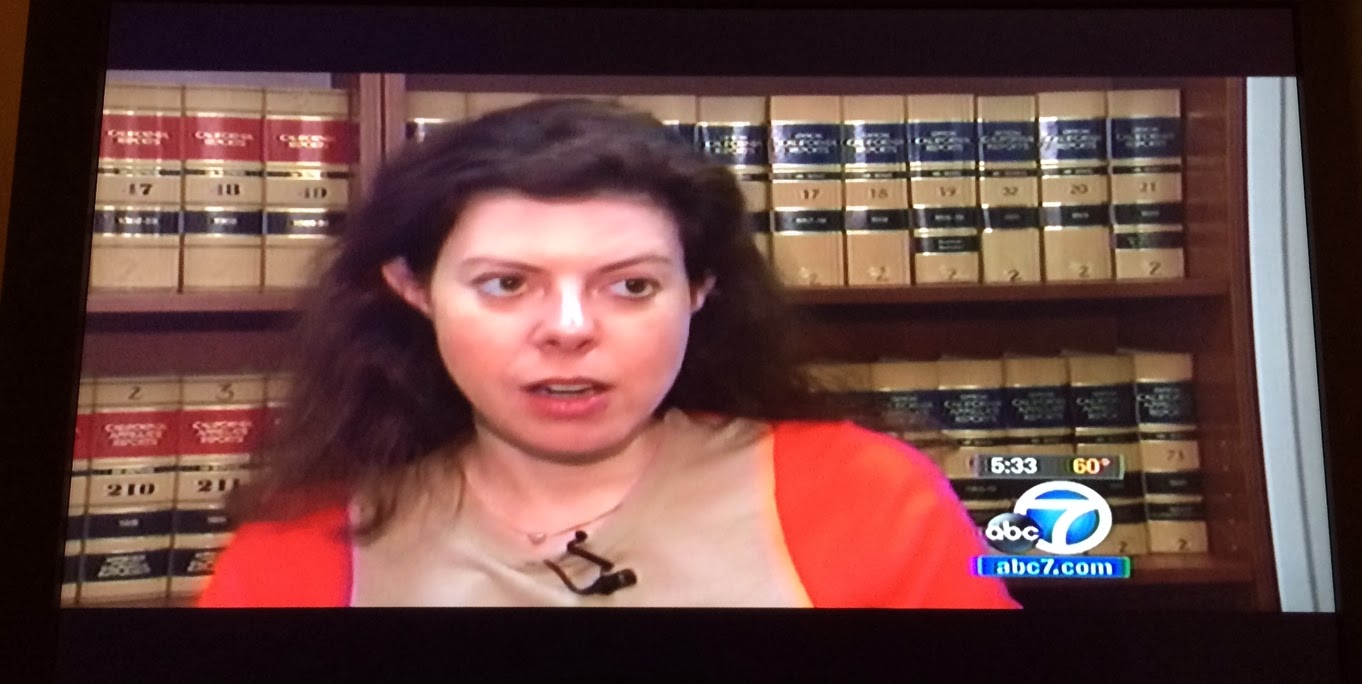 Enjoyed being on NBC LA today to discuss Rep. Henry Waxman's retirement. Rep. Waxman has been a member of Congress for four decades. He is the sixth most senior member of Congress, having been elected in the wake of Watergate. He has been a staunch advocate of broadening health care coverage (he helped to write the Affordable Care Act), increased environmental protection, and many other issues.

Quoted in this article in the Sacramento Bee.

Read more here: http://www.modbee.com/2014/01/29/3159785/arena-opponents-file-against-city.html#storylink=cpy
“A lot of this comes down to who the judge is,” said Jessica Levinson of Loyola University Law School in Los Angeles. She added, “The more problems (there are), the more a judge is going to be inclined to say the signatures shouldn’t qualify.”

Los Angeles: Be and Be Seen

My latest op-ed in the Huffington Post is here.

Here is the first paragraph:

Quoted in this one in the Sacramento Bee.

The state legislator who often says his constituents’ main concern is landing a “j-o-b” may be in need of a new one himself.
A Los Angeles jury on Tuesday convicted state Sen. Rod Wright on eight felony counts in a case that challenged whether he lived in the district he represented, potentially sending the Democratic lawmaker to prison for up to eight years. A sentencing hearing is scheduled for March 12.
Prosecutors alleged Wright did not live in the Inglewood home he listed as his address when he ran for office in 2008, and instead lived in Baldwin Hills, a swankier community outside the boundaries of his working-class district. They charged him with eight felony counts – two counts of perjury, one count of filing a false declaration of candidacy and five counts of fraudulent voting.

...
Jessica Levinson, an election law expert at Loyola Law School, said the difference in how cases are treated can reflect varying priorities among county prosecutors.
“These are very visible cases,” Levinson said. “When you bring a case against a legislator you want to be really sure you’re going to win, because it’s going to be in the paper.”

Quoted in this article in the Sacramento Bee.

The campaign to force a public vote on Sacramento’s downtown arena plan was dealt a considerable blow Friday, when the city’s top elections official rejected the measure for “major” legal flaws and ruled it should not appear on the June ballot.

...
Jessica Levinson, an election-law expert at Loyola University in Los Angeles, said courts tend to interpret the petition requirements strictly.
“You have to dot your i’s and cross your t’s,” Levinson said. “Just because people signed (the petitions) doesn’t mean you don’t have to follow the provisions.”
She said courts have upheld decisions by city clerks to reject petitions over wording issues.
“There is absolutely case law that says, ‘This might sound picky, but we have these provisions for a reason,’ ” she said.

Quoted in this article in the Guardian.

...
McDonnell's defence was dismissed on Wednesday by various experts on campaign finance regulations, who say the law still makes a clear distinction between the lavish private gifts of the type he admits accepting, and donations that are used to fund political campaigns, which are kept to certain financial limits under the law and are not supposed to be diverted for personal use.

“There is absolutely a difference between personal and private, even if it can sometimes be difficult to define in every instance,” said Jessica Levinson, a professor at Loyola Law School in Los Angeles.

“The magic words are: is it used for a 'political, legislative or governmental purpose', and a Rolex is not, a dress is not. You don't get to use campaign funds as a personal piggybank.”
...
Few politicians in Washington could argue they never gave preferential personal access to donors. Barack Obama, for example, was instructed by Hollywood donor Jeffrey Katzenberg to make sure he personally spent time at each table of paying guests during a recent campaign fundraiser, according to claims recounted in a New Yorker profile of Obama published this week.

“What President Obama does is not illegal, but unquestionably those who can give large sums obtain different types of access and a different type of relationship from those who don't: that's our current legal framework,” said Levinson. “The difference here is that McDonnell kicked it over on to the illegal side, but in terms of what he provided? A lot of people do that.”
...
But politicians are often allowed to transfer funds from campaign coffers to fund other aspects of their inauguration, such as events.

“The accusations are absolutely qualitatively different from what happens elsewhere and I'm not forgiving anything,” said Levinson. “But there is an argument that if you say, 'Buy me a $50,000 watch and I'll do x for you', it's better than what happens now, which is a tacit version of that. It's at least out in the open.”
By Jessica A. Levinson No comments:

I am quoted in this article in the Los Angeles Times.

Jessica Levinson, a Loyola Law School professor who studies governmental ethics, said it was troubling that an elected official would use government workers to perform work on a private residence, even if the official reimbursed taxpayers.

"The question becomes, 'What else would the workers be doing at that time?'" Levinson said. "Does reimbursement make the taxpayer whole? Is fair-market value paid?
"Our public officials should not appear to be using their position for their own benefit. These accusations are dispiriting to people who don't have access to county workers to improve their residences.

I am quoted in this article in the Los Angeles Times.

Jessica Levinson, a professor at Loyola Law School who studies governmental ethics, said that if the work at Ridley-Thomas' residence was ultimately deemed inappropriate, the supervisor would be responsible, no matter who first suggested the improvements.

"He's not unfamiliar with what it means to be a public official or the state ethics code," Levinson said. "He's the person who said yes to the work. Whether or not the idea started with him, he OK'd the project."

Here is my latest op-ed. It appears on a new site called Politix.

You can read an excerpt below:

Quoted in this piece in the LA Times.

One of those groups, the Small Business Action Committee, disputes its $11-million penalty and had only $11,260.74 in the bank as of June 30, according to the latest reports available. The other group, the California Future Fund for Free Markets, faces a $4-million penalty but has disbanded. The penalties were levied in October by the California Fair Political Practices Commission.

"I don't know if they're ever going to see the full amount," said Jessica Levinson, a Loyola Law School professor who tracks campaign finance issues. "It can be very difficult to ever collect the money."

One of those groups, the Small Business Action Committee, disputes its $11-million penalty and had only $11,260.74 in the bank as of June 30, according to the latest reports available. The other group, the California Future Fund for Free Markets, faces a $4-million penalty but has disbanded. The penalties were levied in October by the California Fair Political Practices Commission.
"I don't know if they're ever going to see the full amount," said Jessica Levinson, a Loyola Law School professor who tracks campaign finance issues. "It can be very difficult to ever collect the money."
By Jessica A. Levinson No comments:

"This may fall under the category of egregious behavior which we wish is criminal, but may or may not be," Loyola Law School professor Jessica A. Levinson told The Huffington Post.
Back when he was U.S. attorney, Christie was known for his aggressive pursuit of public corruption cases, often against politicians who happened to be Democrats. At the time, he was armed with the broad "honest services" statute, which was used to go after public corruption until it was struck down by the Supreme Court in 2010. The law, which made it illegal to deprive "another of the intangible right of honest services," was deemed unconstitutional. Nowadays, there has to be some sort bribery or kickback scheme to bring a honest services charge.
Levinson confirmed that an honest service charge is out for now unless information regarding improper payments comes out. "Right now this just looks like political retribution," she said.
By Jessica A. Levinson No comments:

What is the state of California's Budget?

I'll be on KNX 1070 this morning to discuss.
By Jessica A. Levinson No comments:

Who Will Lead the California State Senate?

Quoted in this article in the Sac Bee (Kevin de León aims to move past Calderon scandal to lead Senate)
That Sen. Kevin de León remains a serious contender to become the next leader of theCalifornia Senate may seem surprising given the events of the past six months.
His name is mentioned 56 times in an FBI affidavit alleging that Sen. Ron Calderon accepted $88,000 in bribes from an undercover agent and a hospital executive.
De León himself accepted $5,000 in campaign contributions from the agent.

Read more here: http://www.sacbee.com/2014/01/05/6046614/kevin-de-leon-aims-to-move-past.html#storylink=cpy
...
That’s the combative nature of politics, said Jessica Levinson, a law professor at Loyola Law Schoolwho sits on the Los Angeles Ethics Commission.
“Is (Calderon) such a tainted figure at this point that just being associated with him is problematic, or are people really innocent until proven guilty?” she said. “The law and politics are different things. ... Politics is a lot more about appearances.”

News from Nevada re campaign finance violation: "Judge: Whittemore can stay out of prison while appeal is considered"

Quoted in this one:

In a major victory in Harvey Whittemore’s ongoing legal battles, a federal judge has ruled that the fallen power-broker can stay out of prison until the U.S. Supreme Court rules on a major campaign finance case, which could affect his appeal.
...

Jessica Levinson, a professor at Loyola Law School in Los Angeles, said she was surprised by Hicks’ ruling on the Whittemore case because McCutcheon deals with aggregate contributions, not the annual individual limit for one candidate, which was the issue in Whittemore’s case.

Levinson said she does not believe the high court will address a question that it was not asked to answer.

“I don’t think McCutcheon is going to save him,” Levinson said of Whittemore. “Even if the court struck down aggregate contribution limits on First Amendment grounds, and even if the ruling was broad enough to include the individual contributions, Whittemore has been convicted of a law that was previously in place and they would have to make the ruling retroactive.

“I think this was an abundance-of-caution ruling.”