Last fall, the panel sought to discover the source of $11 million in contributions from a mysterious Arizona group to oppose Brown’s tax increase ballot measure and support a campaign finance initiative challenging the political dominance of labor unions. In November, the commission won a lawsuit forcing the group to reveal that the donor was from Virginia. The FPPC and state Attorney General Kamala Harris are still investigating to learn the names of the financial backers.
“The Arizona case showed Californians and it showed members of the public throughout the country the shell game that corporations can play when they want to spend money in politics,” said Jessica Levinson, a professor at Loyola Law School in Los Angeles. “But it also presented a real opportunity for people to try to reform that influence. What people woke up to was the head of California’s watchdog was actually pushing for this before the case and literally was at theCalifornia Supreme Court at midnight filing briefs.”
Last month, the agency moved swiftly to unmask the mystery donor behind a signature-gathering effort to force a public vote on city financial aid for a new arena for the Sacramento Kings. Under the legal scrutiny, Seattle investor Chris Hansen acknowledged contributing $100,000 to the petition drive.

Read more here: http://www.sacbee.com/2013/09/22/5757521/california-political-watchdog.html#storylink=cpy
By Jessica A. Levinson No comments:

A hearty congratulations to current Chair of the FPPC, future FEC Commissioner Ann Ravel, who was just confirmed today by the U.S. Senate!

A short piece I wrote for the HuffPo re Ann Ravel's nomination to the FEC is here.
By Jessica A. Levinson No comments:

Honored to have been quoted on the front page of the NYT, above the fold:

LOS ANGELES — California is challenging the historic status of American citizenship with measures to permit noncitizens to sit on juries and monitor polls for elections in which they cannot vote and to open the practice of law even to those here illegally. It is the leading edge of a national trend that includes granting drivers’ licenses and in-state tuition to illegal immigrants in some states and that suggests legal residency could evolve into an appealing option should immigration legislation fail to produce a path to citizenship.

With 3.5 million noncitizens who are legal permanent residents in California, some view the changes as an acknowledgment of who is living here and the need to require some public service of them. But the new laws raise profound questions about which rights and responsibilities rightly belong to citizens over residents.
“What is more basic to our society than being able to judge your fellow citizens?” asked Jessica A. Levinson, a professor at Loyola Law School, referring to jury service. “We’re absolutely going to the bedrock of things here and stretching what we used to think of as limits.”
By Jessica A. Levinson No comments:

I am so grateful to FPPC Chair Ann Ravel for coming to Loyola Law School yesterday and today to share her thoughts and insights on political reform, disclosure, civic engagement, and many other issues. 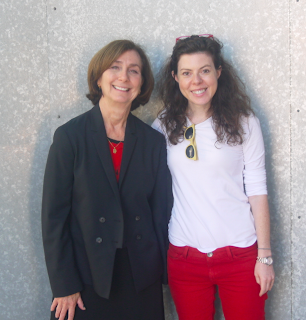