Quoted in this article in the Los Angeles Times.

San Gabriel Councilman-elect Chin Ho Liao was the second highest vote-getter in the city's March elections, but his first time on the council dais last week was as a witness under cross-examination.
The City Council voted not to seat Liao after resident Fred Paine filed a complaint alleging that Liao's true residence is outside of the city's borders. Though Liao has filed suit in Los Angeles Superior Court to contest the council's vote, the city has also created its own hearing process to determine Liao's residency.


Jessica Levinson, an elections law professor at Loyola Law School, called the council's actions "atypical" and "fairly inappropriate."
"The City Council has a clear conflict of interest," Levinson said. "It's ousted incumbents, purporting to have the jurisdiction and power to adjudicate whether their victorious challengers can be seated."


Governor Jerry Brown recently returned from a trip to China, the purpose of which was to increase trade between the country and the Golden State. He was accompanied by 10 staffers. Sounds expensive, right? It no doubt was.
You might be wondering how strapped taxpayers could afford to foot the bill for such an international trip. Well, you need not ponder this issue. Brown did not travel on the public dime. Instead special interest groups footed the bill for his international voyage. These groups include the California Beer and Beverage Distributors, the California Hospital Association, Kaiser Foundation Health Plan, State Farm Insurance, Bank of America, Wells Fargo & Co., United Airlines, HSBC, and Siemens. No doubt, all of these groups would like to secure favorable treatment by the state.
Many smart people have voiced concern over this arrangement. It strains common sense to think that special interests that lobby state officials do not want something from Brown in return for their generosity. By definition, lobbyists would not do their jobs if they did not attempt to persuade public officials. There is nothing illegal about this set up. One problem, however, is that those without money or lobbyists do not gain the same access and/or ability to influence their elected officials.
So is the solution, as some have proposed, to prohibit special interests from funding these trips? Well, that also raises concerns. For one, the state is not exactly flush with money, and whenever we can save taxpayer dollars, we should. For another, these trips can serve important purposes: If Brown is able to increase trade and revenue, it would be very difficult to say that the trip did not pay off. It would be a shame for Brown and other officials to miss out on these trips all together.
Finish reading this post on KCET.org.
By Jessica A. Levinson No comments:

Why I want to teach my students to be skeptics...

I explain here in a Loyola spotlight video. 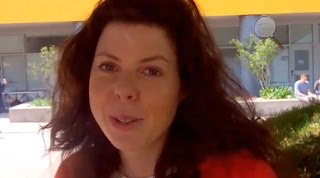 Quoted in this article in the Pasadena Star.


SAN GABRIEL-- Election experts and fair government advocates questioned a decision made last week by the San Gabriel City Council not to seat Councilman-elect Chin Ho Liao because of a challenge filed with the city questioning his residency qualifications.
Doug Johnson, a fellow at the Rose Institute of State and Local Government at Claremont McKenna College, said the council's decision not only to refuse to seat Liao but also launch its own investigation into his true residency was "very unusual. "
"It's a question for a court to remove him from office, the city is on shaky ground in trying to refuse to seat him," Johnson said. "Councils aren't really judicial bodies. "
The city received a complaint and threat of litigation from resident Fred Paine on March 19 against Liao. In turn, Liao's attorney George Yin has threatened legal action against the city.
Though Liao was the second-highest vote-getter in the March 5 vote, the old council - which included ousted incumbents Mario De La Torre and David Gutierrez - voted Tuesday not to swear him in along with the other winners, incumbent Kevin Sawkins and newcomer Jason Pu.
The council also voted to hold a public hearing to determine whether Liao can be seated on the council. Assistant City Manager Marcella Marlowe said the city has not yet determined the details.
Only Councilwoman Juli Costanzo voted against the council hearing,
arguing that the issue be referred to an outside party. But Councilman John Harrington said Tuesday he did not want to "shirk" the responsibility. "If someone raises a question, it's my job to investigate," Harrington said. "My goal is to make sure justice is done. "
Many residents spoke out against the council's decision Tuesday, accusing the council of going against "the will of the people." During the tense campaign, Liao did not deny that he had moved from the home where his wife and daughter still live in to a San Gabriel apartment six months before the election.
Costanzo and Harrington endorsed Sawkins, De La Torre and Gutierrez, who ran as a unit. The three brought up Liao's residency during the campaign.
Jessica Levinson, a professor at Loyola Law School, said the council's decision prematurely convicts Liao.
"If someone is elected, until it's been proven that person doesn't live in the district, I'm not clear that just based on their own findings that they do have power to just not seat someone," Levinson said. "And it seems to be there is kind of a conflict of interest here when the losing incumbents decide to hold hearings on basically whether or not they should be replaced."

Quoted in this article in the L.A. Times.

California Insurance Commissioner Dave Jones lashed out Tuesday at another double-digit rate hike for thousands of small businesses getting their health insurance from industry giant Anthem Blue Cross.
But this time Jones got some help from a surprising source. He has quietly tapped Consumer Watchdog, his political ally and the state's most outspoken industry critic, to help review health insurance rate increases under a one-year contract worth as much as $88,000.

The insurance industry expressed dismay that the state enlisted its longtime nemesis to help review rate increases, and some experts questioned whether it's necessary to further antagonize insurers at a time when state officials are trying to work closely with the industry to implement a massive healthcare expansion.
Public-policy experts also scoffed at the arrangement.

"Their very aggressive stance against insurance companies raises serious questions about a conflict of interest," said Jessica Levinson, a Loyola Law School professor and expert on government ethics. "You want an independent researcher."
By Jessica A. Levinson No comments: